Chief Red Cloud - Sioux
Maȟpíya Lúta or Makhpia-sha was born in 1822 in Nebraska.  He became the Chief Red Cloud of the Oglala Lakota (Sioux). He was one of the most capable Native American opponents the United States Army ever faced.
At a young age, he fought against neighboring Pawnee and Crow, gaining much war experience.
Red Cloud's War - 1866 to 1868
Red Cloud's War was the name the US Army gave to a series of conflicts fought with American Indian Plains tribes in the Wyoming and Montana territories.  The battles were fought between the United States Army and several Native American tribes, including the Lacota Sioux.
The Fetterman Massacre - December 1866
This at the beginning of Red Cloud's War (or the Battle of the Hundred Slain).  It was the event on the Plains to that point with the hightest US Casualties.
Captain William J. Fetterman was sent from Fort Phil Kearny with two civilians and 79 cavalry and infantrymen to chase away a small Indian war party that had attacked a wood party days before. Captain Frederick Brown accompanied Fetterman; the two were confident in their troops and anxious to go to battle with the Indians. They disobeyed orders to stay behind the Lodge Trail Ridge and pursued a small decoy band of warriors, led by an Indian on an apparently injured horse. The decoy was the prominent warrior Crazy Horse. Fetterman and his troops followed the decoy into an ambush of over 2,000 Sioux, Cheyenne, and Arapaho. Combined Indian forces suffered only 14 casualties, while they killed the entire 81-man US detachment.
Custer's Last Stand
In 1874, General George Armstrong Custer led a reconnaissance mission into Sioux territory that reported gold in the Black Hills, an area held sacred by the local Indians. Formerly, the Army tried to keep miners out but did not succeed; the threat of violence grew. In May of 1875, Sioux delegations headed by Red Cloud, Spotted Tail, and Lone Horn traveled to Washington, D.C. in a last-ditch attempt to persuade President Grant to honor existing treaties and stem the flow of miners into their lands. The Indians met on various occasions with Grant, Secretary of the Interior Delano, and Commissioner of Indian Affairs Smith, who finally informed them on May 27th that Congress was ready to resolve the matter by giving the tribes $25,000 for their land and resettling them into Indian Territory. The delegates refused to sign such a treaty, with Spotted Tail responding to the proposition by saying: “When I was here before, the President gave me my country, and I put my stake down in a good place, and there I want to stay . . . You speak of another country, but it is not my country; it does not concern me, and I want nothing to do with it. I was not born there . . . If it is such a good country, you ought to send the white men now in our country there and let us alone.”
Although Red Cloud was unsuccessful in finding a peaceful solution, he did not take part in the Lakota war (Custer's Last Stand) of 1876-1877 led by Tȟašúŋke Witkó (Crazy Horse) and Tȟatȟáŋka Íyotake (Sitting Bull).

In 1878, Red Cloud and his followers moved to the Pine Ridge Reservation in South Dakota.

Red Cloud outlived all the other major Sioux leaders of the Indian Wars. He died on December 10, 1909, at the age of 87 on the Pine Ridge Reservation, where he was buried.

Red Cloud only had one wife. 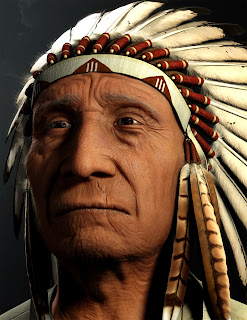 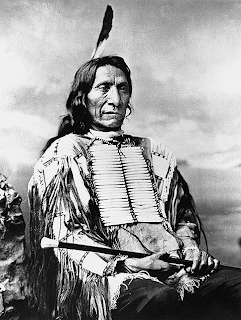 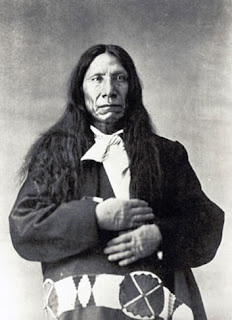 As a warrior Red Cloud stood first among his people.  As a general and statesman he ranked equally high, having been long prominent in treaties and councils, and several times a delegate to Washington, his attitude having been always that of a patriot from the Indian standpoint.

If you are LDS (a member of the Church of Jesus Christ of Latter-day Saints) and you have a new FamilySearch account, you can find Chief Red Cloud and his descendants on new.familysearch.org. Once you are in new.familysearch.org, type in your user name and password. Click on the Search tab. Click on the Search by Number tab. Type in LHZF-8QX in the Person Identifier box. Click on Search

Chief Red Cloud's pedigree with children will appear. At this point you will be able to move around and see his ancestors and descendants. If you have trouble, contact your ward family history consultant.